Laughing at the Enemy

I have spent the last several weeks reading Home Office documents and scouring the magnificent – and exhaustively comprehensive – Hansard site for House of Commons speeches.  On a sunny day like today, I felt in need of something lighter.  I would imagine that audiences in the midst of war often felt the same – sure, you could hammer home to them the importance of the fight – but why not let them have a few laughs while they’re at it?  Anti-nazi propaganda served the purpose of letting off war-steam and fear through laughter.  Below are some examples I found and watched today:

Brainpickings introduced me to the animation of Jiri Trnka, whose “The Spring-man and the SS” brings to life the urban legend of the chimney sweep who became a nazi-fighting superhero.  You can watch this on my Tumblr, The Victory Stitch:

Walt Disney Studios made a number of war propaganda films following the financial flop that was Fantasia.  Funded by the government, Disney was able to keep his artists on the payroll by making such films as “Four Methods of Flush Riveting” as well as animated shorts featuring dwarves, pigs and ducks.  The only film I remember from this period is Donald Duck’s nervous breakdown film, Der Fuhrer’s Face, but today I came across the more earnest “Education for Death”, which seeks to answer the question:  what makes a Nazi?  In the film we see the education of young Hans from tender child to blinkered soldier, marching resolutely toward his own tombstone, marked with a swastika, topped with a helmet.  Beyond Hitler being smothered in a Ring Cycle heroine’s bosom, there aren’t a lot of laughs here.  For that, you have to turn to Popeye.  “Spinach Fer Britain” bolsters the “special relationship”, while “You’re a Sap, Mr. Jap” would come to be banned – not unlike the more racist cartoons of Bugs Bunny and Tom & Jerry.  In times of war, it’s easy to lose your racial perspective and it’s easy to see why.  When we’re afraid we can make the enemy the Bogeyman and fear him in every closet, under every bed, or we can turn him into a clown and mock him, viciously.  Is it better to fear Hitler or laugh at him?  You decide.  If you want to see Education for Death yourself, you can download it from this Wikipedia page – it’s public domain. 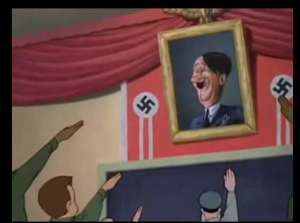 From: Research
← Tumblr
War Art →
No comments yet