On resilience and gratitude 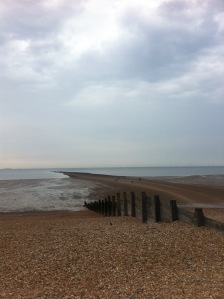 Today is a good day.  It started with a cup of tea and a good, long run by the sea.  I haven’t been much of a runner lately, because I have been so tasked with editing.  And because I haven’t run in so long, my iPod ran out of juice two songs down the road.  Disaster!  Typically, I run and write to music, the same music, again and again, as if I can conjure some spell to keep me going, keeping my fingers and my feet in constant motion. Today, there was nothing but my own huffing and puffing and the scud of my feet, until I realised I could also hear the sea, grey waves on the shingle, sounds ordinarily shielded by Elvis and the Doobie Brothers in my ear. The wind was still, the sun was bright, the dogs were curious. And maybe the silence made room for thankfulness, for instead of chanting along to Genesis, I was thinking about the long hard run we do as writers.  How easy it is to lose momentum, lose our footing.  We stumble, we run out of steam.  Today reminded me how thankful I am for the running, for one foot in front of the other, and for the writing, one word after the other, even when the running and writing are hard. We trip up.  We fall.
This fall I have been working on resilience, getting back up on my feet. I have been talking classes and talking to people about how to bounce back/bounce forward and, initially, to look for ways to thicken my skin. Of late, it has felt far too thin.  Any wind could blow right through me. blow me down.  I realise I’m more fish skin than leather, when this industry requires we wear vinyl, Teflon, bubble wrap, aluminium, chain mail, Kevlar.  The other day, I was told that I’m porous and, now, I think that’s no bad thing.  Most humans are, when they’re vulnerable.  Writers (and humans) have to be porous enough to let all the feelings pass through, to turn soft bellies out to the world even at the risk of being kicked. Today, I’m thankful for thin skin and flexibility. Knees that bend, fingers that type, wrists and hips and feet and limbs that take me where I want to go, even when the road and the writing are hard.  The seasons change, and so do we.  Today, instead of turkey eating, I’m sitting down to write with a cup of tea, as I would on any ordinary, but wonderful, day.

The Writes of Women

If you don’t know Writes of Women, the fabulous blog by Naomi Frisby, or @Frizbot on Twitter, you are in for such a treat.  These thoroughly comprehensive collections of the best writing by women in the media are my go-to source for news.  A celebration of book reviews of women writers, LGBTQIA, women of colour, women in translation, working class voices – this blog really does have it all.  Naomi is a tireless champion of women’s voices, and this week I’m very pleased to be there, too, as I was on Rebecca Mascull’s site.  Here’s the link – give her a read, won’t you?