What do agents really want?

Last weekend’s first Kent Festival of Writing, organised with WhitLit, offered a full day of workshops about different aspects of writing, from Julie Cohen’s on plotting with Pixar and building a character from a coin toss, to mine on the perils of editing.  (I’ll blog more about that soon.)  The day culminated in a panel with agents – and what it was that they were looking for.  Below is an edited version of their talk:
Moderator Dr. Jeremy Scott, lecturer at Kent University, introduced us to the participating agents:  Alex Holley at Michelle Kass Associates & Jessie Botterill at Janklow & Nesbit, and asked how agents work.

ALEX HOLLEY said, early on, she became, “seduced by the variety of being an agent. You’re in at the very beginning, working really closely with writers (to ensure) it’s as good as it can be before you go to an editor.”  Being an agent is, for her, “a mixture of talent scouting, building relationships with writers, going into battle for writers, nagging publishers, and feeding back.”
JESSIE BOTTERILL said that Janklow & Nesbit are the UK arm of a larger US company.  As such, they take on very few writers, but, “We can work very, very closely with the (ones they do). We have an emphasis on editorial; we might work for a year together before we think about sending to an editor. I love editing. It’s really difficult to get a publishing deal, and I want to make sure my authors have their best chance. We work on their manuscript until it’s right. I love storytelling, I love great voices. I love to be on the side line, cheering them on.”
DR. SCOTT asked how much of an agent’s job was editing?
JESSIE said, “It is almost all my job. Most people only get one chance to show work to publishers. There’s so much material out there, you really have to nail the book on the first attempt.”
ALEX said, “Our attitude is that we’re investing for the long term. We’re falling in love with a voice. It’s more common to have a great idea poorly executed than to have a wonderful voice.”  She said, “Everyone in our agency reads everything. We work as a team with all completely different backgrounds and tastes. There’s a team to catch things.”
DR. SCOTT asked how writers should best approach them.
ALEX said, “For our agency, we have a quick chat on the phone. We don’t take unsolicited material.”  After the initial phone conversation, she invites a writer to send in a letter which will serve “as a memory prompt for a conversation we’ve already had.” Agents have the opportunity to see potential, she says.  “Editors say if the writing isn’t tip-top, they don’t have to take it. Agents have the time to help make things great.”
JESSIE said,  “Janklow invites everyone to submit. For agents, this is our bread and butter. The first hour of every day, I open every submission email. The cover letter is the shop window for your writing. I’m looking for myself, but I’m very aware of the tastes of the others. It’s a compliment when a writer picks us out of other agents to work with us. I feel I’ve been targeted, and if I think it’s the right book for me, I’ll think you’re very smart.  When you’re thinking about submitting, really nail your cover letter. We take our job very seriously. A jokey or sarcastic cover letter might put us off.  Be professional. Make sure your work is clean. Don’t cc in emails when you submit.  It’s a small world. We all know each other.”

ALEX added, “Yes, is it professionally written? Have you researched what we do? Have you researched other authors represented by the agents or the companies? If someone were to pick up your book, what other books would be in their shopping basket? We want to know what you’re like.”  She encouraged writers to add in their letter if they’ve done courses or workshops, to tell agents that they’re treating their writing seriously. She’s looking for “a really compelling concept, a sense that you have lots of good ideas. Do you have a writer’s brain? Can you think on your feet? The best part of the job is getting to know everyone’s writing style and editorial style. What enables a writer to make the best draft possible?”  But, “Make sure you’ve edited your book before you submit it. A lot of being an author is editing yourself. You want to be open to help from others, but no one can do it for you.”
JESSIE: “An agent’s job isn’t only to sell your book. We’re your champion for the rest of your writing life. Middleman between you and publisher, all you don’t want to say. Negotiating terms of your contract, making sure you’re protected and getting enough money for your rights. We’re constantly thinking about you and your writing, the life of the book that you’re writing.”
ALEX: “We really want to find you. We’ll read everything. It’s a real labour of love. Sometimes it takes a while, because existing clients have delivered books or there’s some crisis, some contract. We read new manuscripts on our own time. On the train, on holiday, weekends and evenings. We love reading submissions, but sometimes it takes a bit of time.”  Understanding that it is hard for writers to wait for feedback on their submissions, she said, “It’s fine to nudge an agent if you haven’t heard in 4 weeks, just to check in, but not every week.”
DR. SCOTT asked how writers could best help agents.
JESSIE encouraged writers to have strong ideas about the market.  “You’re not writing into a vacuum. It’s a business.”  Telling an agent where a writer sees her book on the shelves of Waterstones, for example, helps an agent understand how the writer sees her work.  “Who is your ideal reader?”
ALEX sang the praises of her client, local writer Julie Wassmer and, specifically, her approach to marketing.  “She has lots of ideas about how to do events, how to write extra material from characters’ POVs for publishers. You don’t have to have a Twitter feed or a blog, but if you’re engaged in that, it’s exciting to think about how your book might spin out. Could you write short stories based in the same world, to use as a marketing tool? Can you open up the world?”
DR. SCOTT asked what it was the two agents were looking for, specifically. 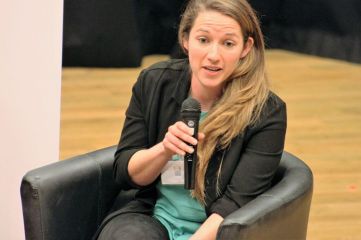 JESSIE said, “I work on the commercial side. I have to have a lot of plot in my books, so a lot of my work is full of twists. I like really dark, gory, nasty books. When I’m thinking about books, I’m thinking about trends in crime, young adult, etc. I’m led by what the markets are looking for. I like strategy and finding books that will feed into the mass market.”
ALEX said that, aside from great voices and multi-layered writing, she is interested in cross-platform work, “speculative fiction, twitter stories – spores (where) you put out the seed of something and it’s open to interpretation.”  She cited work by authors who create stories in 100 tweets or works that can be opened up and expanded across different platforms, such as games or live action role play.  It’s all, she said, “an interesting way of creating a splash. If your book is the sun, other work can be the rest of the constellation around it.”
Jessie:  “The best writing is honest and genuine. If it’s what you want to do, be confident. Confidence is an alluring thing.”
ALEX: “It’s really seductive to feel like a writer is having fun, not only trying to fit a genre. Trust yourself.”
DR. SCOTT opened the floor to questions from the audience.  One of the first was a question about potential in a writer.  Was there a natural bias, then, towards younger writers?
ALEX said no.  “It depends on the personality. Younger writers might not have the story depth or the ability to write complex characters. Novels teach us to empathise with all different kinds of characters. Life experience is crucial in this. No one puts their age on a covering letter. It doesn’t matter what age you are. It would be great to see more diversity.”
Another question: what happens when agents change agencies?
JESSIE said, “Editors move around a lot. Agents tend to stay where they are. It’s a conversation to have with a writer – do they want to stay with the agent or the agency for future projects? There will be a clause in the contract for deals – revenue will continue to go to the agency, not the agent. It’s a really personal relationship. It’s an emotional journey.”
A last question was about how agents sell work and what the success rates are.
ALEX said, “If we’re not selling your book, we’re not doing the job for you. All the work we do before it’s sold is speculative, not knowing if there is going to be a pay off.”  But agents work until the pay off comes.
JESSIE said, “What percentage of our agented authors get published?  100%  You don’t take anyone on unless you believe they can get published. We have 100% success rate.”  But she said it may not be in the first round of submissions; she told the story of one author who took seven years to sell her first book.  But it did sell, and she’s gone on to write and sell much more, which offered much encouragement.
Many thanks to the Kent Festival of Writing, Dr. Scott, Alex Holley & Jessie Botterill for giving a roomful of writers a little insight on their process and a great deal of hope.