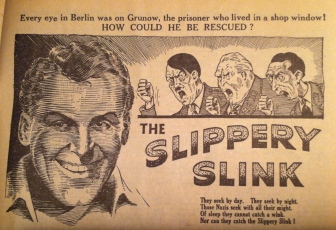 “They seek by day. They seek by night.
Those Nazis seek with all their might.
Of sleep they cannot catch a wink,
Nor can they catch the Slippery Slink!”

This comes from “Adventure”, a wartime comic book dated May 4th 1940.  It’s issue No. 966.  According to the cover, which features “The Human Torpedo Lands in Britain” and “Free – War Savings for Boys Named Inside!”, it comes out every Monday and is priced at 2d. Inside, you find “The News-Rangers Round-Up”, a story “How the Heroes of Finland Fought On!” and “The Nazi Torpedo – How a Nazi skipper scuttles his ship – in a Suffolk creek”.  But my favourite has to be The Slippery Slink and the tale of how clever British actors and musicians, assembled as The League of Slinks, rescues scientist Paul Grunow from his Unter den Linden shop window prison, guarded by the Gestapo and “Gasbag Goebbels”, who is ultimately doped and swapped for the prisoner.  At the story’s end, next week’s story is plugged and the boys are asked to make a guess how the Slink’s next daring exploit will come out. 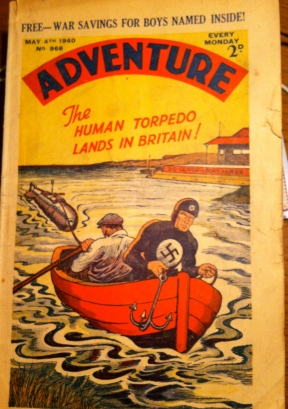 But this is all I know about the mysterious Slippery Slink and his British band, foiling the Nazis at every turn.  It’s another example of how the war was “sold” to children, from Nazi board games whose “challenge” was to make a town “Jew-free” to “Mein Kampf comic books” and Hitler paper dolls.  Adventure readers are urged to cut out a war stamp in the comic book and post it to Fleet Street in the hope of winning a War Savings Certificate – “every one helps to fight against Britain’s enemies.”  In an era of “total war” it’s no surprise that the war is everywhere that children look.  But I can’t help wonder if it made it easier for them to understand the war by feeling that they were a part of it.  It wasn’t a discussion had in the next room, after they’d gone to bed.  It wasn’t a war that was just for grown ups.  Even Adventure tells them, “Come on, Boys! Do your bit for Britain!”  Meanwhile, do you know anything about the Slippery Slink?  If so, do let me know.

Tags: children, Nazi, War
From: Reading
← Lucky
On Editing →
No comments yet