the kindly ones – part 1 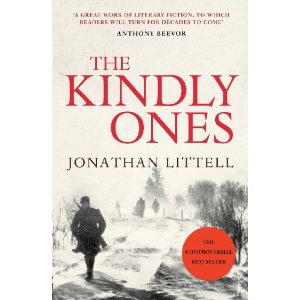 And really, a book like this can only be tackled in parts, in great chunks that could each be a stand-alone book.

“Oh my human brothers, let me tell you how it happened.”  So the book begins with Toccata, meaning a baroque musical composition usually for keyboard, perhaps the German klavier.  The opening chapter is as full-chorded and rhythmically free as any toccata, taking us from a lace factory in post-war France back through the memories of its owner, a former SS intelligence officer.  This flourish of a overture leads us into chapter Allemandes I & II.

An allemandes is an instrumental Barque dance, a slow partnered dance of the 17th and 18th centuries, a piece of music following the prelude in a classical suite; it is also a German folk dance in triple meter, similar to the landler, for the Sound of Music fans among you.    Allemandes I & II is set in the Eastern Front.  In the dance, a line of couples extended their paired hands forward and paraded back and forth the length of the ballroom. Perhaps the ballroom of war was the Eastern Front, which the Nazis hoped to capture in the quick-step of their folk dance, seemingly surprised that the classic dance form took them backwards as often as forwards.  Or is this all a metaphor too far?  It is also the French name for German.

The protagonist, Dr. Max Aue, has a series of changing partners through Allemandes, a number of officers, academics and under-staff who become the objects of his desire, intellectual appreciation and/or lust.  Aue justifies his sexual proclivities by telling us that all officers and soldiers are at it – even in the trenches – and that from the Greeks onward all warriors were encouraged to strengthen the bonds of camaraderie through sexual coupling, as you would be unlikely to leave your lover on the battlefield.  There are dreams, memories and activities aplenty here for the staunchest SS-fetishist.  But I’m not writing about the SS or the Eastern Front.  Really, I’m not even writing about men.

But I am writing about Nazis and I am reading to understand their mindset.  We all have our racist moments, however we justify or explain them away.  Dr. Aue is no different.  Indeed, all of German academia was busy explaining their racism through the new science of Eugenics, while Aue’s colleague, Dr. Voss, attempts to prove who is Jewish and who is not along the Eastern Front through a study of their languages.  “Take German, for instance,” says Voss, “For centuries, even before Martin Luther, people claimed it was an original language under the pretext that it had no recourse to roots of foreign origin, unlike the Romance languages… Some theologians…even went so far as to claim that German was the language of Adam and Eve, and that Hebrew later derived from it.  But that’s a completely illusory claim, since even if the roots are ‘native’ – actually all derived directly from the languages of Indo-European nomads – our grammar is entirely structured by Latin. …”

SPOILER ALERT:  After Dr. Voss’s death, Aue is left to fight his corner in a discussion of a mountain people who are to be executed and and whether their language might prove that they are not acclimatized Jews.  While a female Nazi doctor asserts that no assimilation is ever entire, “Open the pinstripe pants of a Jewish industrialist and you’ll find a circumcised penis,” Aue is able to cast enough doubt on the peoples’ origins and migration patterns to delay the decision, so saving them.  And what are we to make of that?  Did Nazi intellectual SS officers really argue the fine points of their fascist philosophies to save people? To justify their actions?  To soothe their guilty consciences?  Certainly, Dr. Aue is awash with mysterious bouts of vomiting and he witnesses a number of SS and Wehrmacht officers coming unhinged at unmitigated violence.  Can Littell humanize the Nazi experience and belief system through Dr. Aue so that we can come to like him?  Understand him?  Or even forgive him?  Dr. Aue hasn’t actually murdered anyone himself… yet.  What will happen when he does?  Will there still be an attempt at justification?  The rules of war do not apply when the “enemy” isn’t armed.  WWII changed all the rules of war anyway.

I am hoping to understand the arguments used to justify racism and fascism.  I am from a city that is no longer a “white” majority and while it certainly doesn’t bother me, I wonder if it bothers others – others that I know.  People I would consider to be liberal.  Because it’s one thing to hold a liberal belief system; it’s another to live through such an economic downturn that you lose all perspective and you begin to fear “the other” – because bad things must be someone’s fault.  Our present crunch isn’t a patch on pre-Nazi Germany, but… you can see how public opinion responds to fear.  It always does.  Both sides interned their enemies during WWII out of fear; I grew up not far from a race track that housed interned Japanese-Americans – or anyone who “looked Asian.”  But less familiar, less understandable now, is that fear that the “otherness” of someone is a mystery, that you need to measure someone’s head or nose or pick apart their language to get to the root of who they are, as opposed to who they believe themselves to be.  Like a male terrorist hiding in a burka, WWII Nazis feared a Jew in Everyman, the Jew who “looked” German, who was “pretending” to be German, even if they had been there  for generations.  And this is where Littell’s book is relevant for me, when every woman in the internment camp is arrested for being German but there is no system for unpicking who is Austrian, who is Jewish, and who is acclimatized, who actually sees herself as British.  The fear was that every German was a potential Fifth Columnist, a potential spy, a Nazi, but none of this is straight-forward, and the fears shifted as often as the alliances as the war ground on.  And still we intern, even in our own “modern” war.